The Georgia/South Carolina Region of The Leukemia & Lymphoma Society is proud to present this free VIRTUAL education event to blood cancer patients, survivors, family members, caregivers and healthcare professionals*. Experts in the areas of blood cancer research, treatment, and survivorship will present information on each topic. Our goal is to educate conference participants about treatment options, emerging therapies, management of survivorship issues and LLS resources.

*This is NOT a continuing education (CE) program 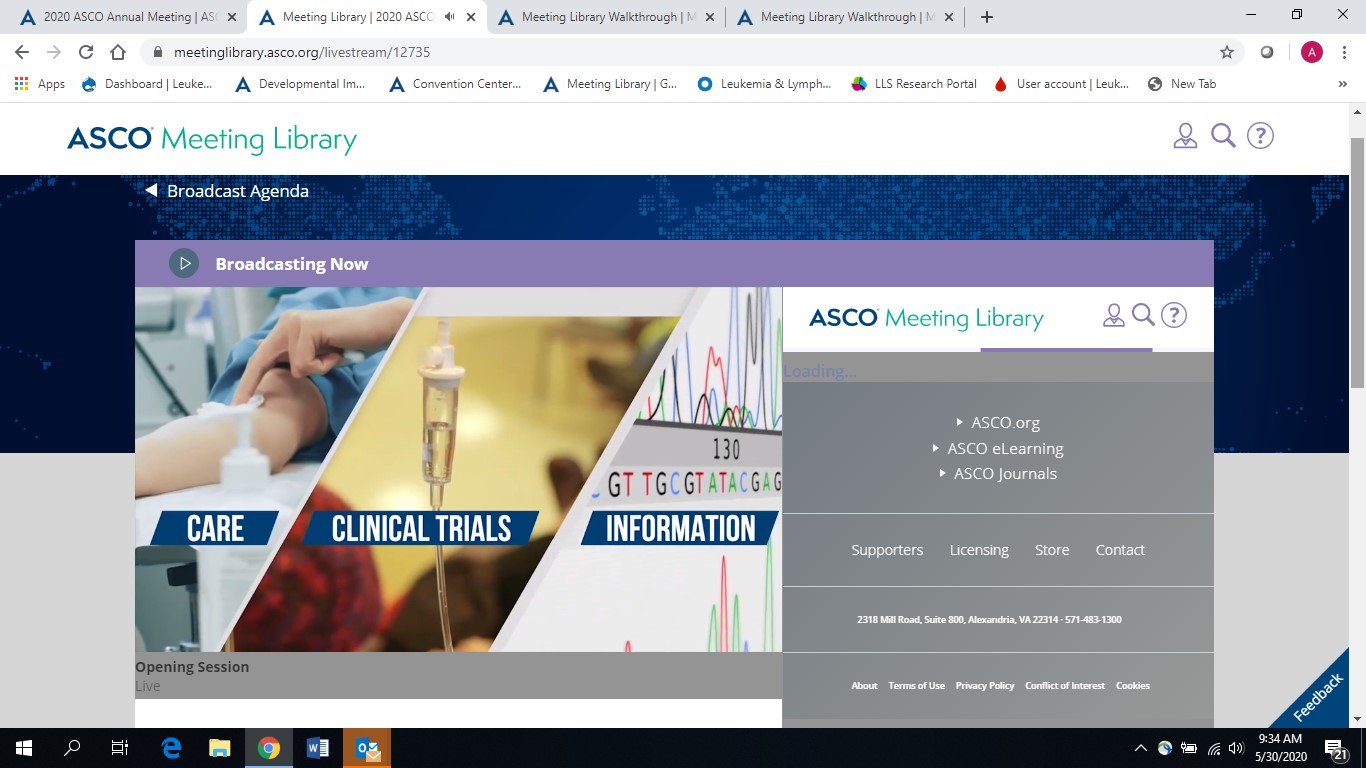 As National Cancer Research Month (May) winds down, it seems timely to reflect on progress in cancer treatments. And that is precisely what we will do this weekend.

This is the weekend Chicago would typically be flooded with more than 40,000 researchers, clinicians, pharmaceutical company reps, media and cancer advocacy organizations as the annual host of the world’s biggest cancer conference. But like all other large events around the globe, the American Society of Clinical Oncology was forced to move their #ASCO20 meeting to a virtual platform. Beginning Friday and running through this weekend, researchers are presenting their latest findings from cancer clinical trials, and cancer professionals from every facet of the field are sharing ideas and pressing for more advocacy on behalf of cancer patients.

The Shadow of COVID-19

With the COVID-19 pandemic forcing this change to a virtual format, a prevalent topic has been treating cancer patients amidst the novel coronavirus crisis. ASCO President Howard A. Burris III, MD, FACP, FASCO, opened the meeting this morning with remarks acknowledging that cancer patient are among the most vulnerable to the dangers of this virus. Blood cancer patients are particularly hard hit. A study published in The Lancet and presented by a group of researchers on Friday showed that patients whose cancer was progressing at the time they became afflicted with the COVID-19 virus are at increased risk of death from the virus - more than five times more likely to die within a month.

Further, findings show that treatment with the controversial combination of hydroxychloroquine and azithromycin is also strongly associated with greater risk of death. However, other scientists wordwide are now questioning the findings and data of this massive study so further investigation is clearly needed. (* Update: on June 4 The Lancet announced that the researchers had retracted their studies regarding hydroxychloroquine and chloroquine).

“The cancer care community urgently needs data on the effects of COVID-19, specifically in patients with cancer,” Burris said “How we improve the care we provide these patients and reduce the number of deaths and severe consequences associated with this disease are among the top questions. The registry contains data from patients who have tested positive for COVID-19 and around 40% of patients in the registry also have active cancer. 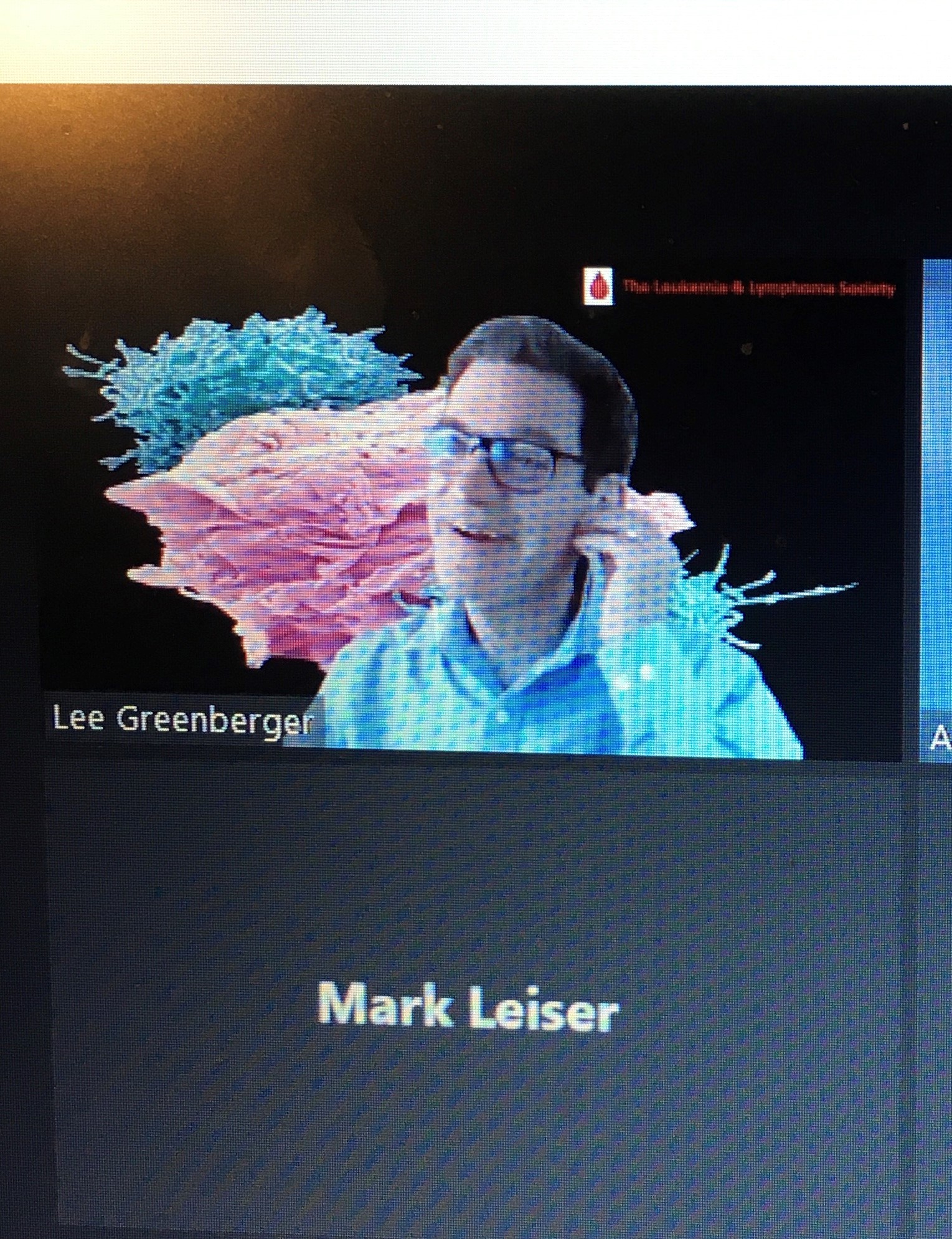 We’ve spoken many times in this blog about CAR-T, a treatment approach LLS helped to pioneer and has supported for more than 20 years, that turns the body’s own immune T cells into supercharged cancer-killers. With LLS support, the therapy has achieved approvals for children and young adults with acute lymphoblastic leukemia, and adult with non-Hodgkin lymphoma.

At this meeting all eyes were on several CAR-T programs for myeloma, all of which target a protein call B-cell maturation antigen (BCMA) prevalent on myeloma cells.

Evidence is mounting that an FDA approval for at least one of these is not far off.

As Lee Greenberger, Ph.D., LLS’s chief scientific officer put it, “If the data holds up and we continue to see long term durability, one of these BCMA-targeting CAR-Ts will likely achieve FDA approval within six months.” The next question, according to Dr. Greenberger is whether we will be able to move the treatment up earlier in the diagnosis. Currently these therapies are being evaluated for patients who have relapsed from at least three or four prior therapies. LLS is currently supporting work in BCMA-targeted CAR-T at Emory University. 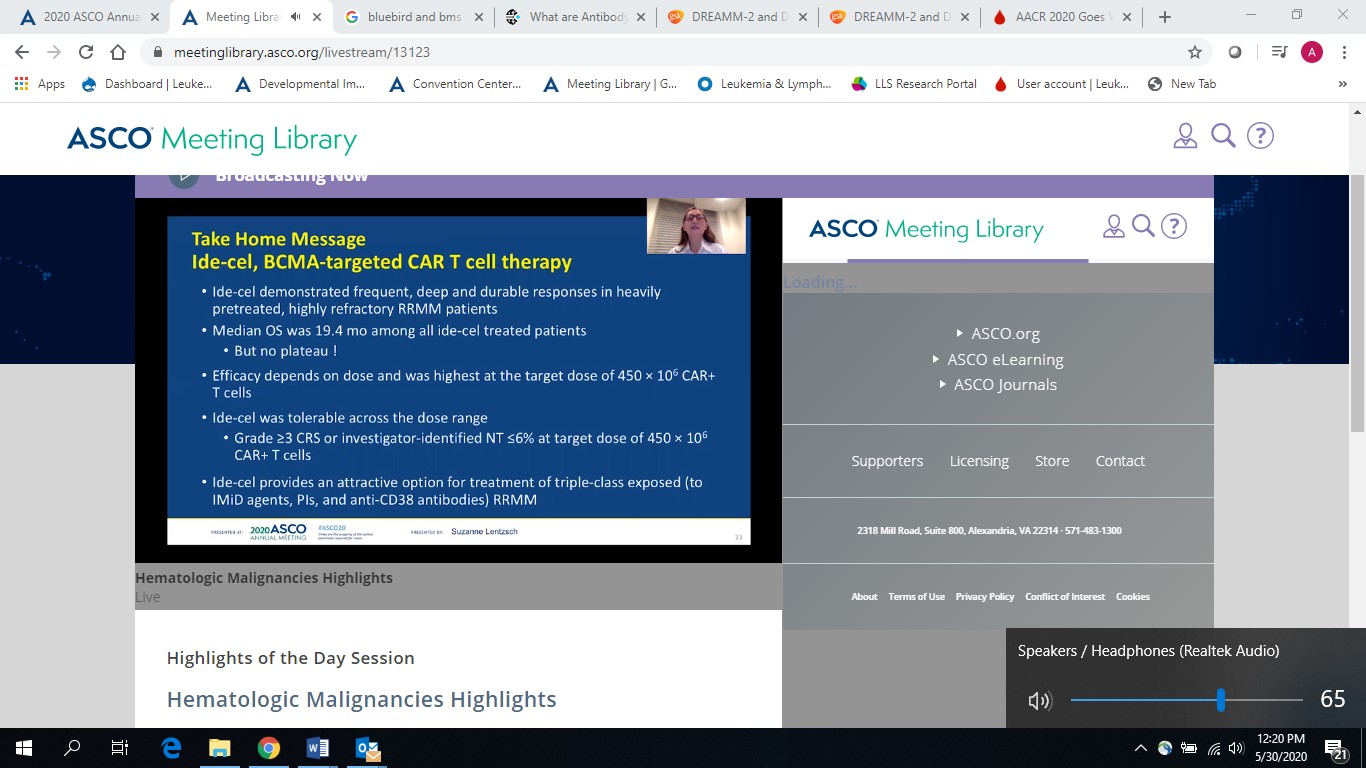 A different kind of BCMA-targeting immunotherapy for multiple myeloma is also on the horizon, and with a decision deadline by the U.S. Food and Drug Administration set for June 2020, this therapy just might beat all of those CAR-Ts to the punch in myeloma.

The drug, called belantamab mafodotin, under development by GlaxoSmithKline (GSK), is an antibody drug conjugate: the antibody is engineered to home in on a specific molecule on the cancer cell, while the cytoxic agent kills the cancer.

Initial results of the DREAMM-6 study presented at the ASCO meeting showed belantamab mafodotin in combination with bortezomib and dexamethasone results in a 78% overall response rate.

CAR-T is an exciting, revolutionary approach to treatment, and immunotherapy has clearly become a mainstay of cancer treatment. But CAR-T is a complicated and costly process because the patient’s own cells must be harvested, engineered and then reinfused into the body. The manufacturing process to develop these highly personalized cells is very time-consuming and expensive.

So the prospect of an “off-the-shelf” CAR-T is intriguing, as it would make the treatment much more widely available on demand. The company, Allogene, presented data for its experimental “off-the-shelf" CAR-T, ALLO-501, that uses donor cells rather than the patient’s own, and the early results are impressive.

In the presentation, 19 adult patients with advanced B-cell lymphoma were injected with escalating doses of ALLO-501. Twelve patients responded, including seven patients whose tumor cells were no longer detectable. With a median follow-up of almost four months, nine of the 12 patients remain in response — a promising signal of ALLO-501’s durability.

The danger of using donor cells is that the patient’s own immune system will attack the foreign cells. But Allogene uses a gene editing tool which seems to overcome this problem.

LLS is also supporting multiple efforts to develop off-the-shelf CAR-T, including funding a team at Baylor College of Medicine.

A Therapy Supported by LLS TAP Continues to Impress

Since the early 2000’s, LLS has supported the discovery and exploration of the science of targeting a protein called CD47 through multiple research grants at Stanford University. CD47 generates a “do not eat me” signal that allows cancer cells to avoid destruction by the patient’s immune system. This signal prevents cancer cells from being swallowed by macrophages, a type of white blood cell that is the garbage disposal system of the immune system.

LLS continued to support the work through our Therapy Acceleration Program® (TAP), a strategic initiative that builds business alliances and collaborations with biotechnology companies and academic researchers. LLS TAP first signed an agreement with Forty Seven in 2017 to co-fund clinical trials in diffuse large B-cell lymphoma (DLBCL), and expanded the collaboration in July 2019 to support registration-enabling trials in myeldysplastic syndromes (MDS).

Notably, 75 percent of AML patients with a particularly challenging subtype due to a specific genetic mutation (TP53), achieved a CR or CRi.

The promise of this therapy reflects the significant impact of LLS’s sustained investment in research, and our TAP program, a venture philanthropy initiative started more than 12 years ago and has already yielded three FDA approvals. Let’s hope that the data for magrolimab continues to show good durability and possibly bring us a fourth approval. That will truly be another win for blood cancer patients.