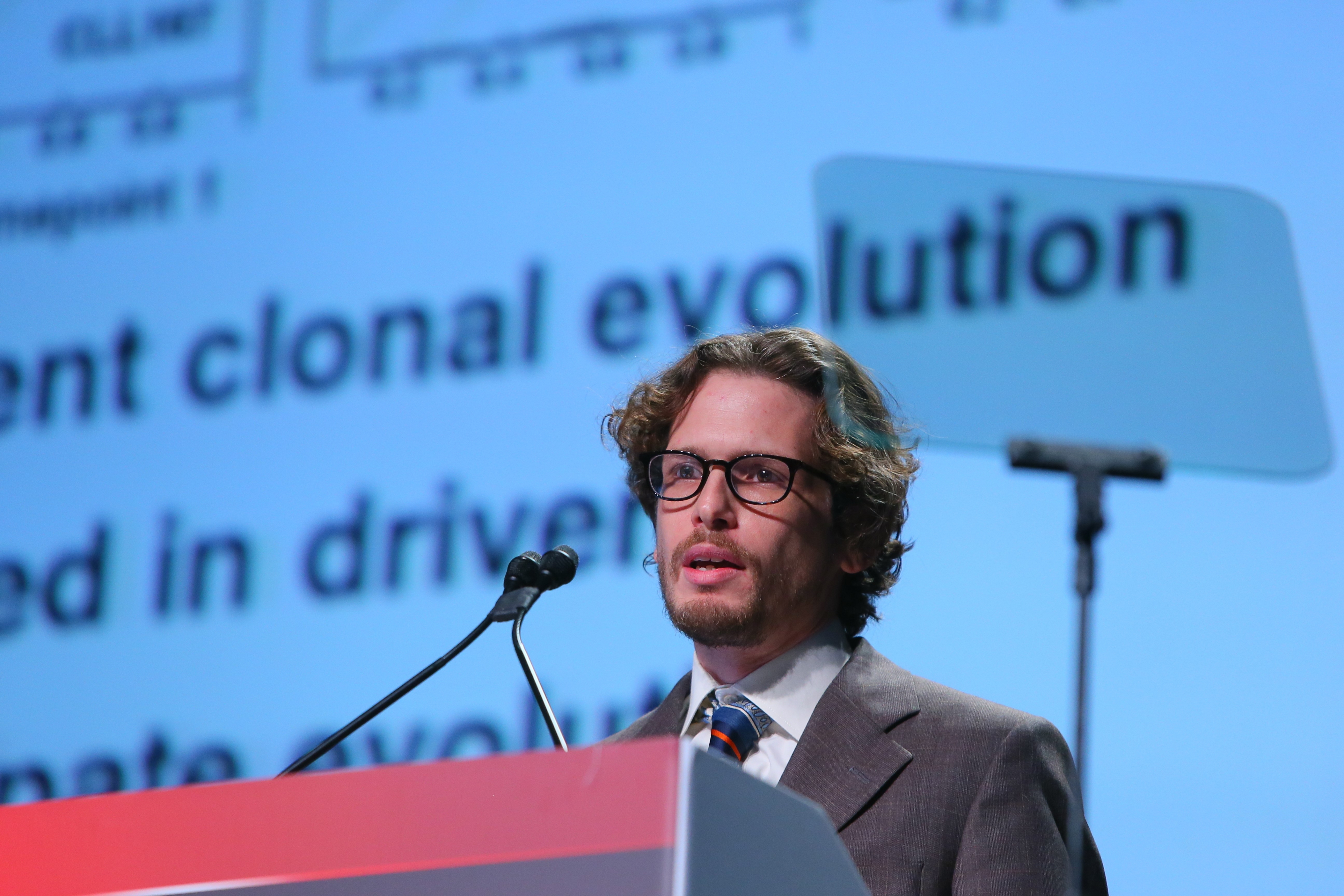 In recent years, there has been a rapid surge in the amount of genomic information available to researchers. This information enhances the understanding of human disease and provides the fuel needed to achieve personalized medicine. New advances in technology and in the ability to analyze massive datasets have allowed scientists to more precisely define cancer behavior, including how these diseases adapt to evade therapy. In order to survive, cancer cells undergo genetic changes in their DNA as well as epigenetic changes, which are reversible modifications to the DNA or the surrounding proteins. This vast amount of information provides unprecedented detail of the different cancer types and the different ways by which cancer manifests in individual patients. Studies exploring this new wealth of genetic information aim to ultimately open the doors to personalized treatment plans tailored to the individual nature of each patient’s cancer.

Dan Landau, Assistant Professor of Medicine at Weill Cornell Medicine, Core Member, New York Genome Center, is leading studies providing a deeper view of the genetic and epigenetic landscape in chronic lymphocytic leukemia (CLL), the most common adult leukemia. CLL is at the forefront of cancer genetic research for a number of reasons, including the ease of collection of CLL samples from the patient's blood and the often relatively slow progression of the disease, facilitating the collection of samples from the patient over a period of months or years. The heterogeneity (high variety) of clinical needs among CLL patients, due to differences in how each patient’s disease behaves, also lends itself to genetic and epigenetic research.

Prior studies by Dr. Landau and other groups, using a mixture of cells from the whole cancer population in each patient, demonstrated a genetic and epigenetic heterogeneity to CLL, reflecting its clinical heterogeneity. These studies showed that CLL evolves over the natural course of the disease as well as during therapeutic intervention. This so-called “clonal evolution” is a salient feature of CLL as well as other cancers. The ancestral cell (either the founding clone or the earliest cell in the lineage that can be identified), produces progeny (offspring) that may change over time. These changes result in the development of subclonal groups defined by different characteristics. Therefore, researchers can infer the origin of the ancestor by mapping out a “family tree” of the CLL-associated oncogenic driver mutations found in the population of CLL cells. Mutations that are found in the whole population have the oldest history and thus are found in the earliest CLL cell population that is still present in the patient; likewise, mutations that are found in only a portion of these cells, called subclonal mutations, cannot have been initial drivers of the disease (though they may be current oncogenic drivers in that subclonal population). The information that forms the family tree of these clones and subclones, derived from a sophisticated computational analysis of every mutation found in all of a patient’s cancer cells, has implications on the future clinical course of that patient’s disease as well as potential therapeutic options.

Sampling a particular patient’s cancer cells over time shows clonal evolution in action. The founding cancer clone will develop new mutations, creating new cancer cell subclones, with potentially different characteristics, with each new mutation. The resulting heterogeneity of the clonal population sometimes strengthens the disease, making it more difficult to treat, and it can also result in the dominance of a certain subclone (or group of subclones) at the expense of inferior subclones. In addition, a change in the cells’ environment may lead to epigenetic changes, called epimutations, in some of the cells, which result in an outgrowth of one or more subclones that are fitter than others, causing further variety in the clonal population, sometimes changing or perpetuating this clonal hierarchy. Environmental changes may sometimes be caused by therapeutic intervention. When this occurs, therapy may change the evolutionary trajectory of cancer cells, which would directly impact the response seen in that patient. CLL clones that have mutations allowing them to resist a particular therapy may make up a tiny fraction of the cancer cell population in early stages, but under therapeutic pressure, one or more of these subclones may come to become dominant and eventually make up a large portion of the population. These newly dominant clones may have other oncogenic drivers that are targetable by current drugs or, possibly, future drugs. Therefore, a more complete understanding of the genetic and epigenetic makeup of each patient’s cancer burden as well as its clonal evolution is critical to advancing personalized therapeutic approaches.

New Developments from the Landau Lab

Though prior studies have greatly increased our understanding of CLL genomics, epigenomics, and evolution in individual patients, most studies relied on sampling mixtures of cells from the whole cancer. Dr. Landau and an international group of colleagues sought to understand the history of CLL in individual patients at the single-cell level to get a more complete picture of CLL. This study was published online in Nature on May 15, 2019. Dr. Landau is the senior author, and, reflecting the collaborative nature of this research, Drs. Federico Gaiti and Ronan Chaligne from Weill Cornell Medicine and Dr. Hongcang Gu of the Broad Institute are all credited with first authorship.

Dr. Landau and colleagues compared the rates of accumulation of epimutations (in this case, changes to the DNA called methylation) in single CLL cells to this rate in a close cell lineage control group of normal B cells from healthy individuals. They found that the epimutation rate is higher in CLL cells than in normal B cells. This shows that CLL cells have a higher capacity to generate epimutations. These studies also suggest that all the CLL cells in a given patient have a common origin.

How do epimutations affect gene transcription?

What information can the epimutation rate provide about the history of the cells?

The epimutation rate also serves as an evolutionary molecular clock. Dr. Landau and colleagues used this concept to construct a family tree of all the CLL cells in a patient. The branching patterns of the family trees from multiple patients suggest a rapid evolutionary process after the emergence of the ancestral clone. The shape of these family trees also suggests that CLL does not likely have significant stem cell characteristics, which present a difficult therapeutic target in other cancers, and may therefore be generally easier to eradicate than cancers characterized by stem cells. Furthermore, the family tree shape reflects a longer proliferative history for each CLL cell, and this is correlated to an increased capacity for more epimutations.

One well-known oncogenic driver for CLL is SF3B1, which is thought to be mutated in subclones found later in the disease course, making it a logical tool for understanding the timing of mutant acquisition. Using known parameters of CLL proliferation as well as family tree construction, Dr. Landau was able to estimate that the acquisition of the SF3B1 mutation in one patient occurred 2,180 +/- 219 days after creation of the ancestral clone. The ability to understand the timing of oncogenic driver acquisition may one day improve the therapeutic choices available to treat each CLL patient.

Can CLL cell lineages also be affected by therapeutic intervention?

Significance of the New Developments

The largely random nature of the acquisition of epimutations in CLL cells results in a heterogeneity of expression of potentially a large number of genes. The various CLL cells may be thought of as “sampling” their environment to find the fittest genetic/epigenetic patterns for that particular circumstance, resulting in the outgrowth of those clones that are best adapted to that environment. Since the environment may change, particularly with therapy, the fittest subclones in the heterogeneous population may then be able to withstand the therapy. This is the nature of cancer – as the patient-and-doctor team seek to kill the cancer cells, the cancer cells “seek” to survive.

Since the cancer cells continuously seek to evolve and adapt to their changing environment, researchers and physicians need to better understand how this happens. The genetic and epigenetic architecture of a patient’s cancer will, in future years, provide insight as to the best way to treat the patient and, potentially, to the problems the patient may encounter. For example, a comprehensive analysis of a patient’s cancer may indicate a tiny subclonal population containing mutations that are known to confer resistance to ibrutinib. Thus, though ibrutinib may initially kill the majority of the cancer cells, knowing that ibrutinib-resistant clones exist in the patient will allow doctors to anticipate the outgrowth of these clones with ibrutinib treatment.

In addition, Dr. Landau’s current study shows that other oncogenic drivers found in some subclones are increased in the blood samples from ibrutinib-treated patients. These drivers could be targetable in patients undergoing ibrutinib therapy, which may lead to better patient outcomes. Therefore, a comprehensive understanding of the subclonal characteristics in a given patient should result in better care for each patient and, perhaps, a cure.

Dr. Landau is supported by The Leukemia & Lymphoma Society through a Translational Research Program (TRP) grant.

Click here to explore other articles on the LLS Research Spotlight.