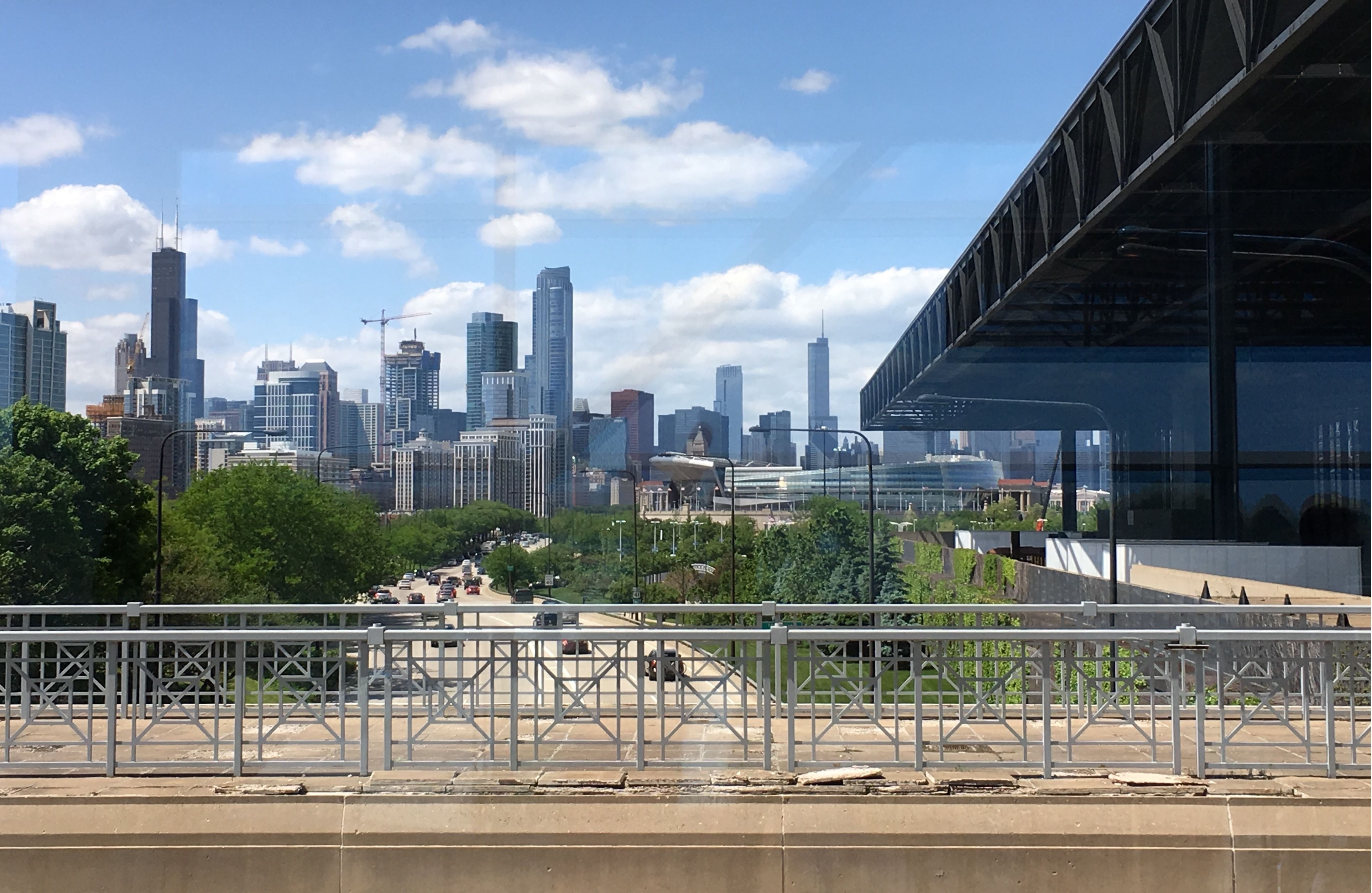 This post is one in a series of news updates from ASCO. Read more by clicking here and here.

The American Society of Clinical Oncology (#ASCO18) annual meeting is an opportunity to show the progress on investigational cancer therapies, better ways to use old medicines and improved methods of diagnosis. 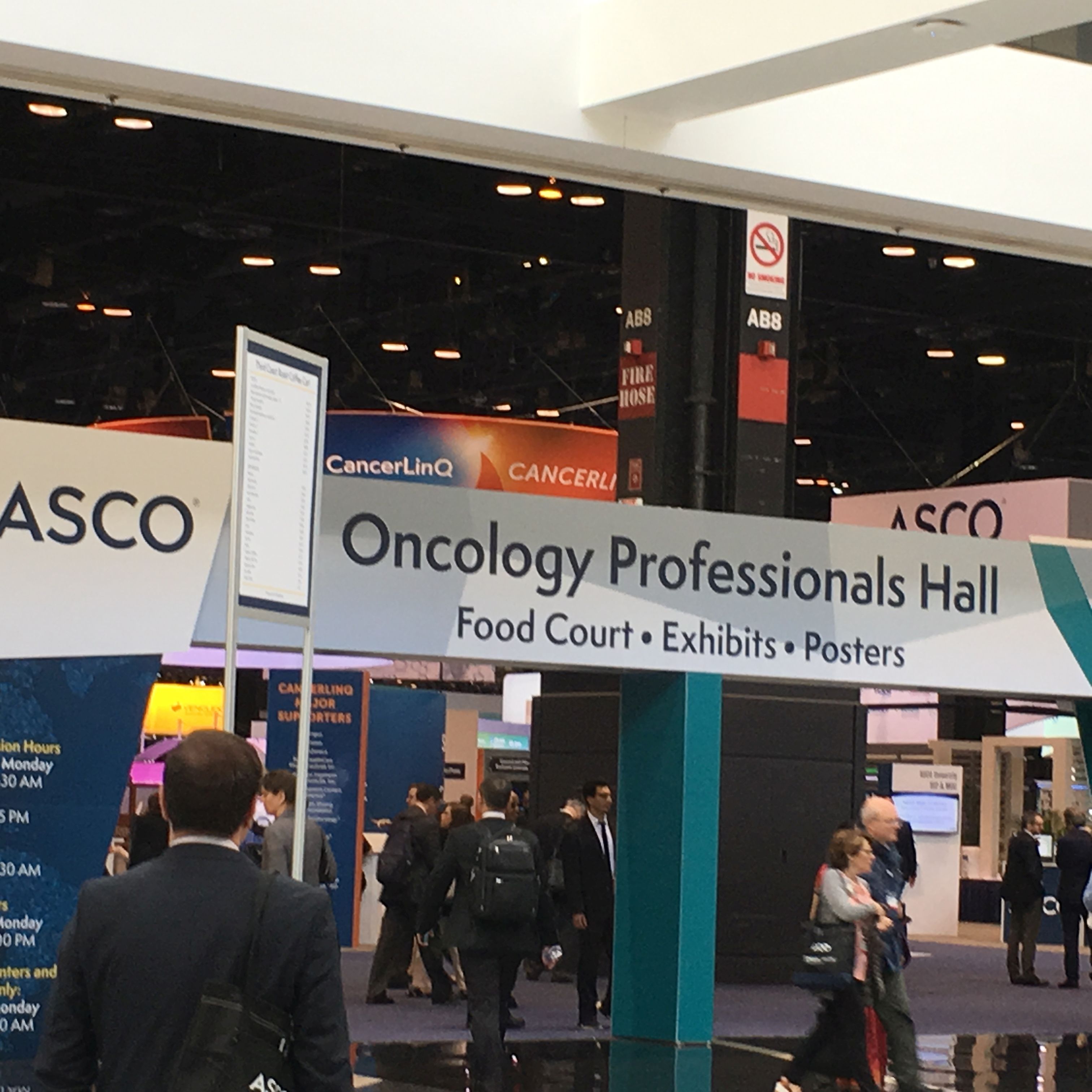 One of the interesting themes to emerge over the past few days here in Chicago is the goal of giving less rather than more treatment. The quest to de-escalate treatment helps avoid both physical and financial toxicity. Precision medicine – using technology to identify a patient’s genetic profile and tailor treatment accordingly – is the key.

The big news of the day on Sunday was from a large study showing that many women with early-stage breast cancer can forego chemotherapy after surgery. The TAILORx trial involved more than 10,000 women and used a genetic test to identify their tumor type. The study found that women whose tumors respond to hormone therapy and test negative for the HER2 gene, which constitutes about half of all women with breast cancer, can safely skip chemotherapy after their tumor is removed.

Key takeaway: Thousands of women may be able to skip chemotherapy – along with all of its damaging short and long-term side effects – and still have a good prognosis. 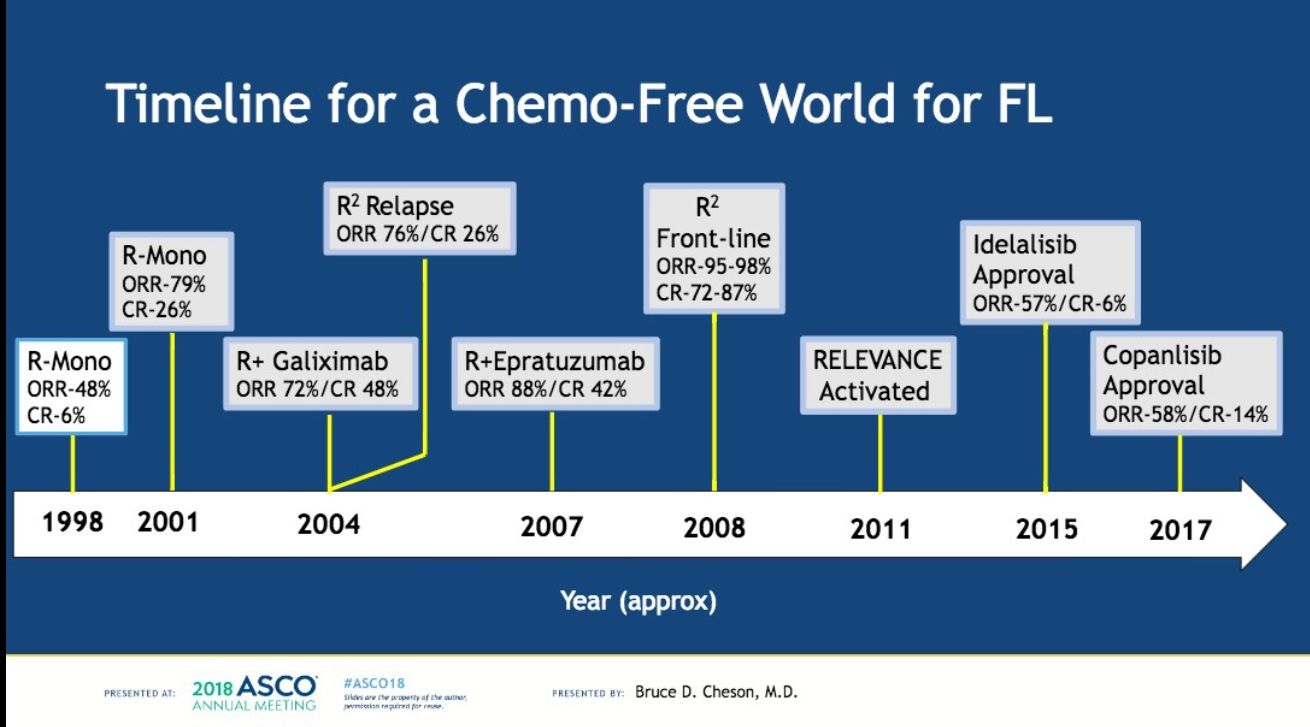 Cheson asserted that targeted therapies such as rituximab, ibrutinib and acalabrutinib, are moving toward replacing chemotherapy as first line therapies for patients with these blood cancers. While these targeted therapies also have side effects, they are better at pinpointing the underlying genetic mutation driving the disease and are less toxic than chemotherapy because they do not harm healthy cells.

“The data for non-chemo regimens are substantial,” Cheson said. He added that what is needed now are rational combinations of therapies and identification of biomarkers so we know who will and who will not respond to targeted therapies.

Key takeaway: In the future, some blood cancer patients may receive targeted therapies as a first line treatment instead of chemotherapy, which has more toxic side effects. 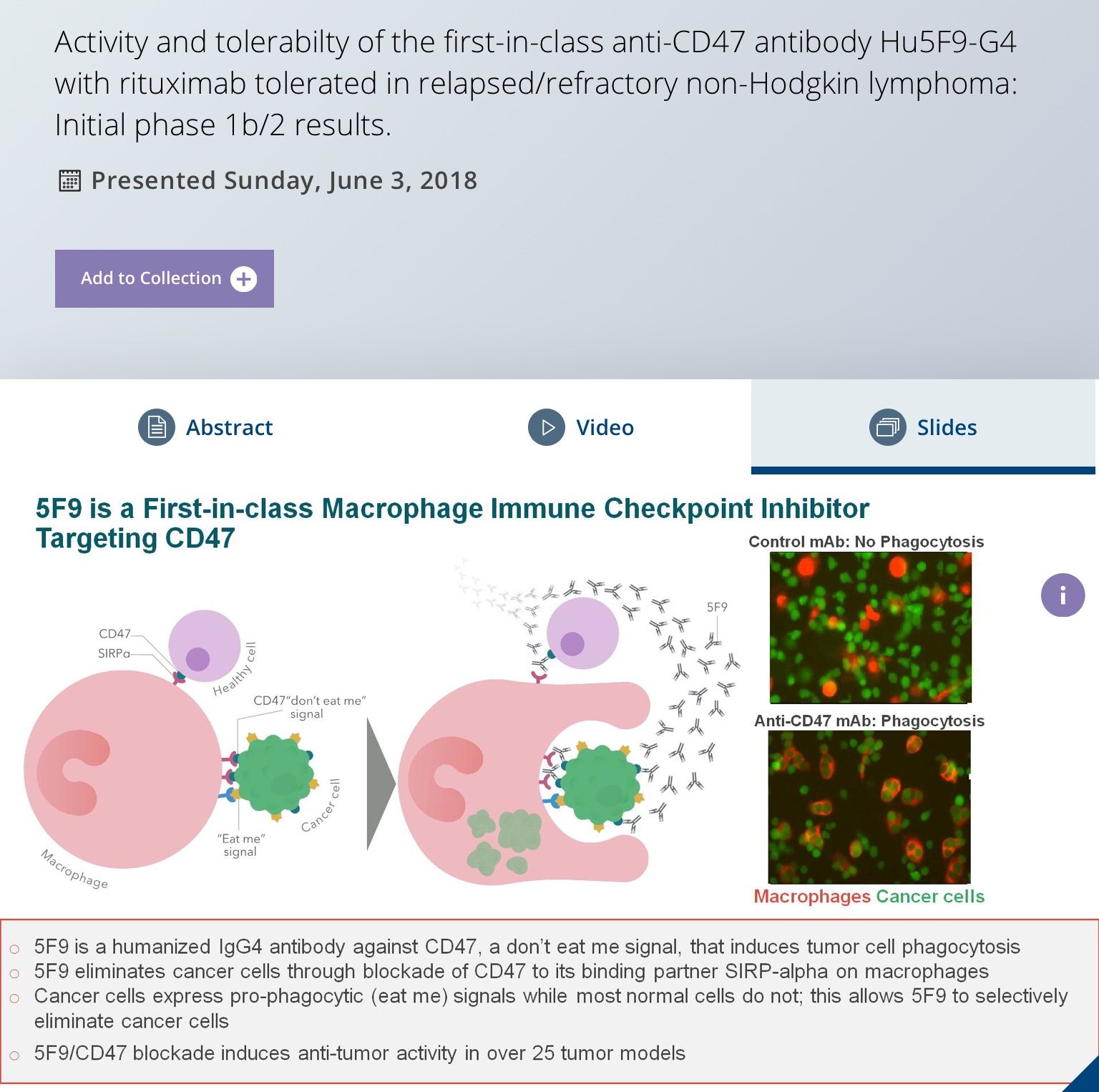 Forty Seven, Inc., a biotechnology company in The Leukemia & Lymphoma Society’s Therapy Acceleration Program portfolio, presented compelling early data from a trial for an innovative immunotherapy approach. The investigational drug, Hu5F9-G4 is a monoclonal antibody that works by knocking out CD47, the so-called “don’t eat me” protein. This protein prevents cancer cells from being swallowed by macrophages, the garbage disposal system of the immune system.

The U.S. Food & Drug Administration recently granted Forty Seven, Inc. fast track designation, which means its review process will be expedited. The drug is being tested in combination with rituximab in relapsed and refractory diffuse large B-cell lymphoma (DLBCL) and follicular lymphoma (FL) patients. The therapy is also being tested in acute myeloid leukemia and solid tumors. The early results showed some patients (43% of FL and 33% of DLBCL) achieved complete response, meaning there were no cancer cells found in scans after treatment. We'll be following the developments of this TAP partner closely. Stay tuned!

Key takeaway: A small group of patients with relapsed or refractory non-Hodgkin lymphoma (NHL) had major responses to treatment with an anti-CD47 antibody known as Hu5F9-G4 plus rituximab (Rituxan). The investigational drug, Hu5F9-G4, targets the CD47 protein, which emits a “don’t eat me” signal that allows cancers to evade immune cells.

* The term “don’t eat me” pertains to cancer cells ability to disguise themselves and escape from being eaten by macrophages, a type of white blood cell. This therapy targets a protein in order to uncover the disguise so the immune system is able to eat, or kill, the cancerous cells.