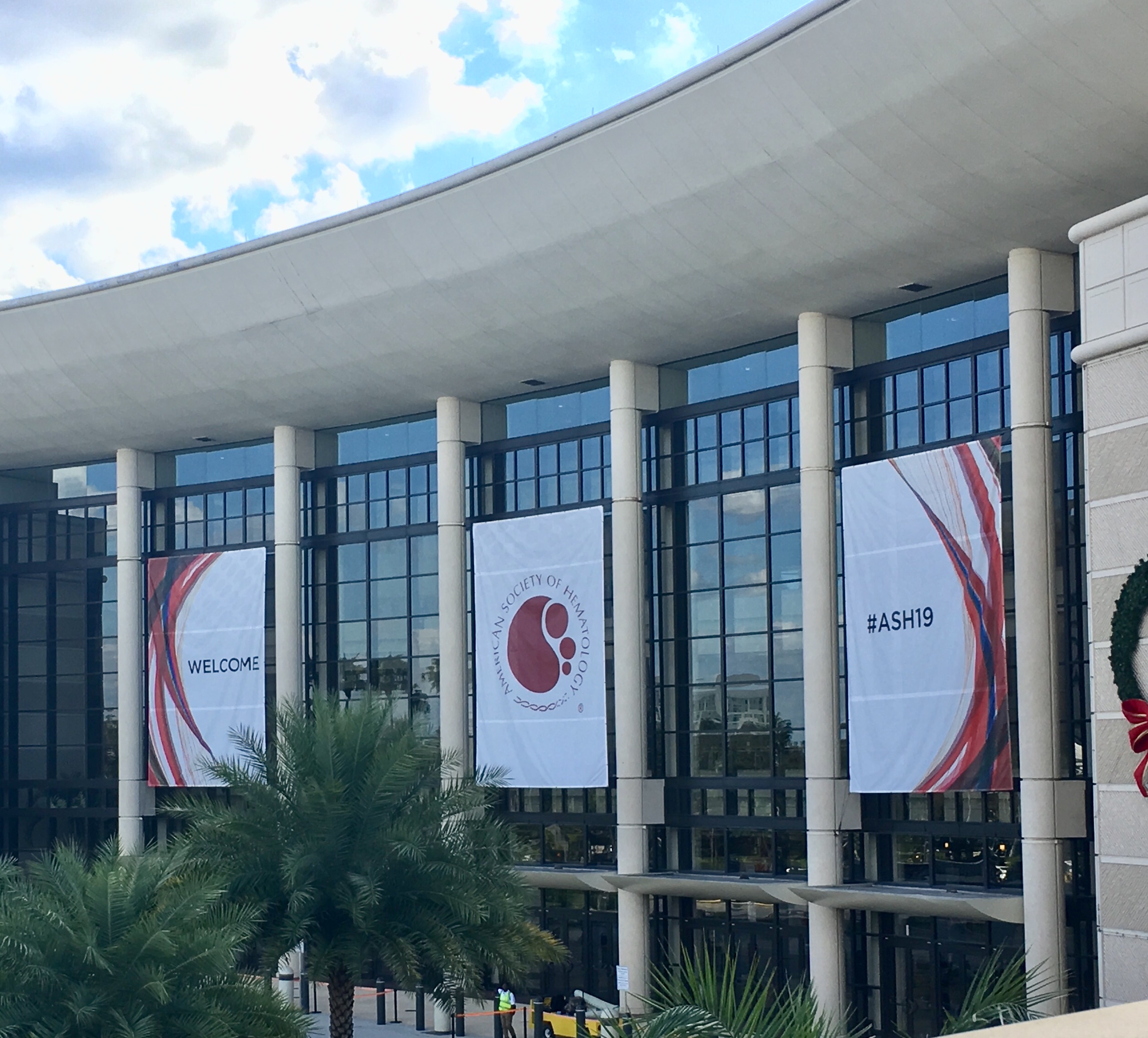 It’s that time of year again, when more than 30,000 scientists specializing in blood cancers and other blood disorders, oncologists and hematologists, pharmaceutical and biotechnology company representatives, and cancer patient advocacy organizations gather in one place to learn about the latest progress in treatments and share new ideas.

This year, we’re in sunny Orlando for the 61st ASH (American Society of Hematology) Annual meeting and Exposition.

Today (Saturday) was the first official day, and there is already much to talk about, but first The Leukemia & Lymphoma Society (LLS) raised the curtain on Friday with several LLS-hosted programs.

At the symposium, Dr. Hunger addressed the treatment landscape for children with blood cancers, and progress in newer therapies that harness the immune system to treat children with acute lymphoblastic leukemia (ALL), the most common cancer to afflict children. These include:

Hunger said more progress is needed in treating children with acute myeloid leukemia adding, “We’ve reached the limits of optimizing treatment for children with AML.” Hunger noted that LLS is working toward launching LLS PedAL, a global master trial designed to bring precision medicine to children with relapsed AML. LLS PedAL will be part of The LLS Children’s Initiative, a comprehensive effort to take on childhood cancer through every facet of our mission – more research grants, expanded services and support, and policies to remove barriers to care.

Dr. Landgren discussed the importance of stratifying high- and low-risk myeloma patients to better tailor treatments and the need for better testing methods to find minimal residential disease (MRD), small traces of cancer cells left after treatment that lead to the high rate of relapse in MM.. He said that multiple four-drug combinations are being tested that appear to improve outcomes but could pose steep financial cost.

Dr. Armand said a type of immunotherapy called checkpoint inhibitors which removes the brakes from the immune system so the cancer cells can’t hide from the cancer-killing T cells, is working in Hodgkin lymphoma, but progress has been more limited in non-Hodgkin lymphoma. But studies of this approach for a type of NHL called primary mediastinal large B-cell lymphoma, may hint at
a “strong whiff of cure” for some patients, he said.

Further, he said one-third of lymphoma patients treated with CAR-T may potentially be cured, a word that oncologists, until recently, have been reluctant to use.

Dr. Bollard discussed challenges of translating the success of CAR-T and other T-cell immotherapies to AML. While it works well for many patients with ALL and lymphoma, there are obstacles with using it in AML.

While there are many potential molecular targets to direct CAR-T cells against, many of them are also found in the healthy cell, thus risking harm to the patient.

Dr. Ebert used another word that is relatively new in blood cancers: prevention. He and his team have made discoveries about a group of mutations called clonal hematopoiesis of indeterminate potential (CHIP) that may predict if healthy people could be prone to developing leukemia as they age. They also discovered these same mutations may be predictors of heart disease. The challenge now is to develop viable interventions for these ticking time bombs. 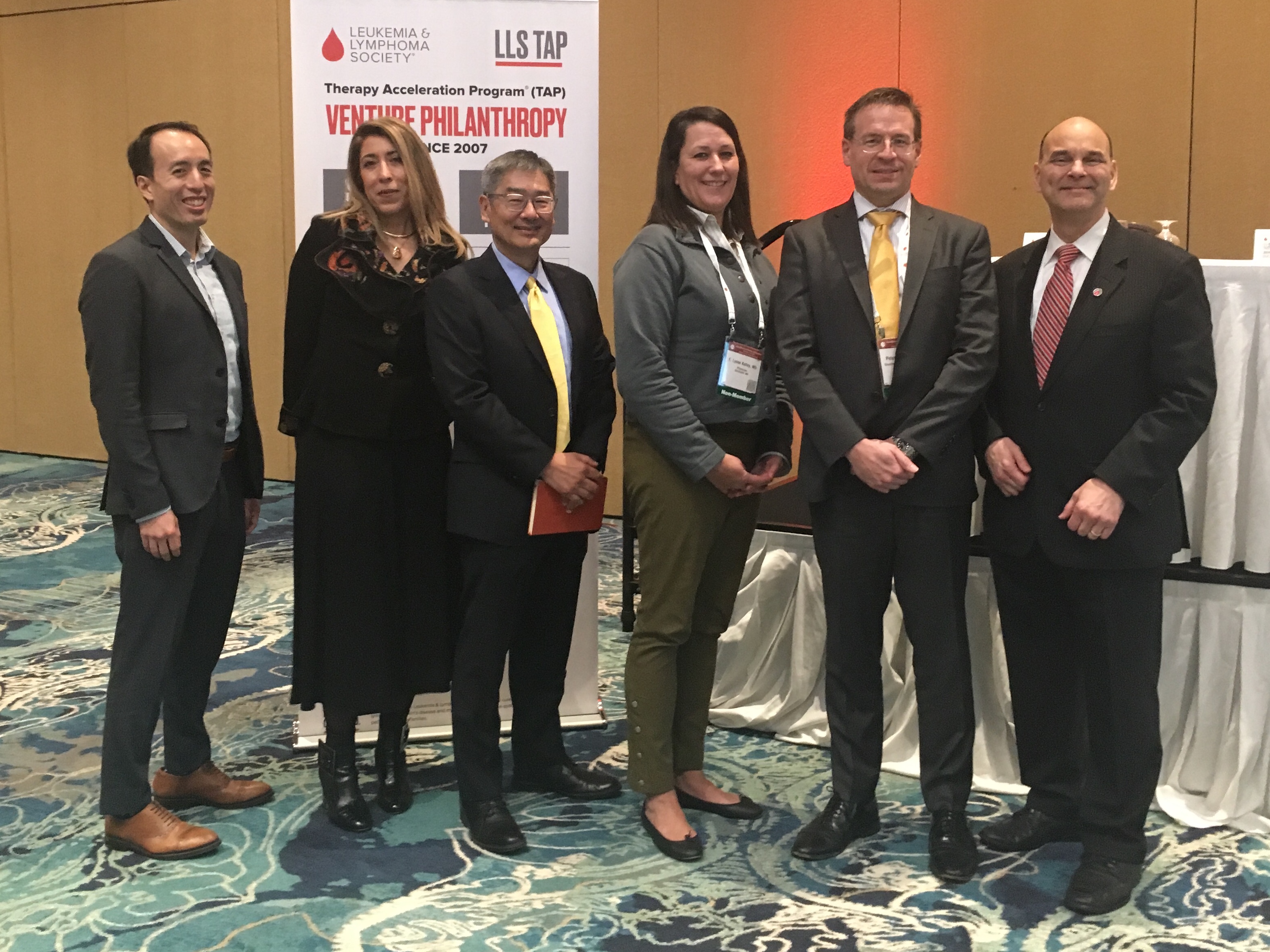 In 2007, LLS launched our Therapy Acceleration Program to help biotechnology companies move their promising treatments faster through the development pipeline. On Friday we hosted a reception with a panel featuring representatives of some of our partners in our Therapy Acceleration Program (TAP), our strategic venture philanthropy model to get promising therapies to patients faster by partnering directly with biotechnology companies and academic centers.

Peter McDonald, of Stemline, discussed how LLS’s collaboration helped his company bring a therapy for a very rare disease, blastic plasmacytoid dendritic cell neoplasm, (BPDCN), over the FDA approval finish line. This is one of three therapies that LLS TAP helped achieve FDA approval. McDonald said in addition to the funding support, and expertise provided by LLS professional staff, LLS also played an instrumental role in raising awareness about the unmet need of this very rare disease.

Forty Seven is a biotech company developing a drug the stops a specific protein - CD47 – from sending out a “don’t eat me” signal. By doing this, the drug unleashes immune cells called macrophages to gobble up the cancer cells. Forty Seven will present data Monday morning from a study LLS has supported. Chris Takimoto, MD, Ph.D., of Forty Seven, spoke of how 47 evolved originally from academic research work that was funded by LLS at Stanford University. LLS-funded researcher Ravi Majetti, MD, Ph.D., was one of the founders of Forty Severn.

All of the presenters agreed that in addition to the critical funding and expertise they received from LLS, the opportunity to tap into LLS’s vast network has been invaluable. LLS also helps the company accrue patients for their clinical trials.

Check back in to this blog throughout the weekend for more updates from ASH, including news about LLS’s Beat AML trial, our collaboration with ASH to help more patients find clinical trials, and exciting progress in immunotherapy for patients with multiple myeloma.